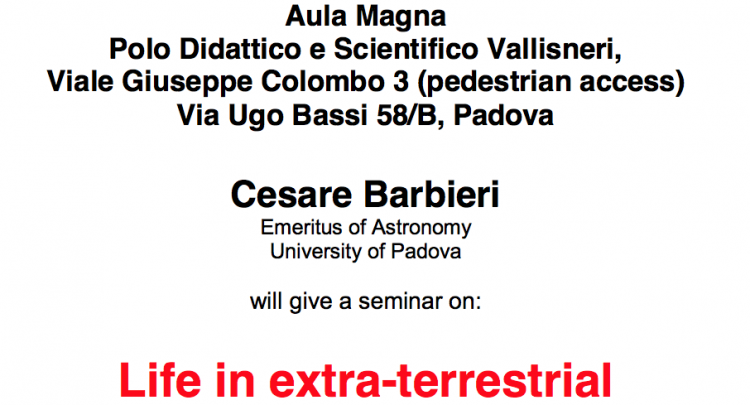 We live in a time of extraordinary discoveries in our Solar System and in planetary systems of other stars. These advancements promote novel investigations of the meaning of life on our Earth and on extra-terrestrial environments , involving scholars of several scientific disciplines, from astronomy to chemistry to biology to engineering, but also sociology, philosophy, theology, and raise the interest of the whole society.

Instinctively, we tend to associate ‘extra-terrestrial life’ to the existence of other living (and possibly intelligent) beings residing somewhere in the Universe. Actually, in the near future we’ll export our life not only to the Space Station, but to the Moon, to Mars, to asteroids.

The study of life outside of Earth is therefore a very complex matter, full of questions such as: how did life originate on Earth, when and where? Did cosmic bodies such as comets, asteroids, meteorites have any influence on it? Where do we search for life outside our Earth and which are its main characteristics allowing us to recognize it? How can we export our life to extra-terrestrial environments, and preserve it against terribly harsh conditions? Should we find ‘intelligent’ extra-terrestrial life, how would humanity react?

In the present lecture, I’ll attempt to convey some information on such diverse fields of research, and possibly some answers to the many questions, from my astronomical point of view. After reviewing the long cosmological process that led to the present characteristics of life on our Earth, I’ll discuss recent results on the presence of liquid and icy water on bodies of our Solar System and on the many complex molecules found in the interstellar medium. The properties of Earth-like exoplanets discovered around nearby stars will be presented with regard to their habitability.

These results have been obtained by an impressive complement of ground instruments and space missions, shortly to be augmented by even larger and more performing telescopes and spacecraft. The role of researches in Italy, in particular from our University and Astronomical Observatory, will be underlined.

In conclusion, a comparative planetology is today possible, our Solar System is not unique, many other extra-solar systems relatively close to us exist and are intensively investigated. We still do not have any evidence for alien civilizations, but the search keeps going on.
A bright future for this new branch of Astronomy is therefore in sight.